Generosity of the Prophet


No person could ever equal Muhammad in generosity. Whatever he received he gave away to others and felt more pleasure than those who received the gift. He never turned anyone away empty-handed from his house and always gave preference to the needy over his own needs.

Muhammad never said no to any request from anyone in his life. He used to say that he was only a distributor and a treasurer and that Allah was the Bestower of everything. Once a man came to him and saw his herd of goats stretching over a vast area. He requested help and Muhammad gave him the whole herd of goats. He went back to his people and told them to accept Islam, for Muhammad was so generous that there was no fear of poverty. Another man asked him for help when he had nothing to give, so he told the man to borrow on his behalf and he would repay the loan. `Umar, who was present, asked Muhammad whether Allah had not burdened him more than he could bear. The Prophet kept quiet. However, a man was present there who offered to help. Muhammad smiled with great joy at his offer.

Muhammad was so generous that he always gave something to anyone who asked him for help, but if he had nothing, he promised help later on. Sometimes it so happened that Muhammad purchased an article for himself, then gave it as a gift to the seller. Once he bought a camel from `Umar and straightaway gave it as a gift to `Umar’s son `Abdullah. Once he bought something from Jabir and gave it back to him as a gift.

Sometimes Allah blessed the food that the Prophet shared so that it multiplied to feed many. During one battle, there were 130 Companions with the Prophet. He bought one goat, slaughtered it and ordered its liver to be roasted. When it was ready, he distributed it among all the Companions and kept a share for those who were not present.

Whenever he received anything, he did not sit in peace until it was finished. Umm Salmah, the Prophet's wife, reported that one day Allah's Messenger came home looking disturbed. She asked him what the matter was. He replied that the seven dinars he had received the day before had remained on the bed until evening and had not been distributed. He did not rest until they were given away.

Abu Dharr reported that one evening he was walking with Allah's Messenger when he said, "Abu Dharr, if the mountain of Uhud were turned into gold for me, I would not like three nights to pass and one dinar still be left with me, excepting what I would leave for paying my debts." He would never rest until all the cash in the house was completely finished. Once the Prophet went home in a hurry after the prayer and then immediately came out again. The people were surprised, but he told them that he had remembered during the prayer that there was some gold in his house. He thought that he might forget and the gold might remain there all night. He went back home to ask that it might immediately be given in charity.

He always paid the debts of the dead and issued instructions to the effect that if anyone died leaving any debt, he should be informed of it so that he could pay it off.

Whenever Muhammad met any miserly person, he advised him to be more generous and charitable. Ibn `Abbas said that he heard Allah's Messenger say, "The believer is not the one who eats when his neighbor beside him is hungry," Abu Hurayrah reported Allah's Messenger as saying, "The believer is simple and generous, but the wicked person is deceitful and ignoble." In short, Muhammad was so generous and charitable that he never kept anything surplus for himself but gave all to those who came to him for help. 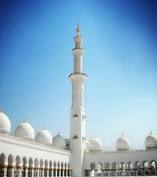