Ramadan -a month of obligatory daily fasting in Islam is the ninth month in the Islamic lunar calendar. Daily fasts begin at dawn and end with sunset. Special nightly prayers called, Taraweeh prayers are held. The entire Quran is recited in these prayers in Mosques all around the world. This month provides an opportunity for Muslims to get closer to God. This is a month when a Muslim should try to:

Ramadan ends with a day long celebration known as Eidul-Fitr. Eidul-Fitr begins with a special morning prayer in grand Mosques and open grounds of towns and cities of the world. the prayer is attended by men, women and children with their new or best clothes. A special charity, known as Zakatul-Fitr is given out prior to the prayer. The rest of the day is spent in visiting relatives and friends, giving gifts to children and eating.

The Quran and Hadith on Ramadan
Inner Dimension of Fasting
Fasting, A Gift from your Creator
How Tos of Fasting
Food habits tips during Ramadhan

As Ramadan Ends
Sunnahs of Eidul-Fitr

The Magnificent World Event of Ramadan takes place in Makkah each year, where more than 3 million Muslims from all over the world go and spend time in worship and devotion to God. You can watch the special Taraweeh prayers being held in Makkah during this month either through a satellite dish network or internet. A website to watch these is: 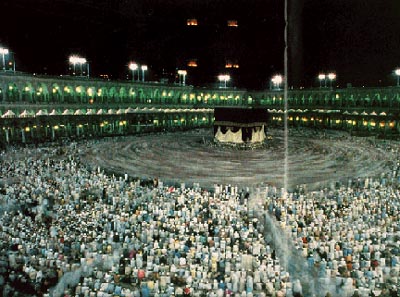