In our day, some circles hold the view that Charles Darwin's theory of evolution does not contradict with religion, and that those who renounce the theory of evolution unnecessarily promote it. This view, however, includes many misconceptions. It is the result of a failure to grasp the main tenet of Darwinism and the extremely dangerous outlook it mandates. That is why, for those who have faith in the existence of God, the mere Creator of all living-beings, yet carry the conviction that "God created living beings through evolution", it would be quite useful to primarily review the fundamental tenets of the theory. In this essay, in an endeavor to warn believers who have this misconception, some essential scientific and logical explanations regarding why the theory of evolution is not compatible with Islam and the fact of Creation it introduces to mankind, are provided.

The basic tenet of Darwinism holds that living beings came into being spontaneously, as a result of coincidences. This view is completely contrary to the faith of Creation.

The most important misconception of those who think that the theory of evolution does not contradict with creation is their assumption that the basic assertion of the theory of evolution is that living beings came into existence through evolving from one another. Accordingly, they comment: "There is no reason why God did not create all living beings by making them evolve from one another; so what is the rationale to raise objection to it?" However, there is a very important point here which is ignored: the essential difference between the advocates of evolution and creation is not based on the question of whether "living beings appeared individually or through evolving from each other." The main question is "whether living beings came into existence by chance and as a result of natural events, or were they consciously created?"

The theory of evolution, as known, claims that inorganic chemical compounds came together by chance and as a result of randomly occurring natural phenomena, they formed first the building blocks of life and ultimately life. Consequently, in its core, this claim accepts time, inorganic matter and chance to be creative powers. Even the layman, who is somewhat acquainted with the literature of evolution, is aware that this is the basis of the claims of evolutionists. Not surprisingly, despite being an evolutionist scientist, Pierre Paul Grassé, acknowledges the implausibility of the theory and summarizes what the concept of "coincidence" means for evolutionists:

"…Chance becomes a sort of providence, which, under the cover of atheism, is not named but which is secretly worshipped." (Pierre Paul Grassé, Evolution of Living Organisms, New York, Academic Press, 1977, p.107)

That life is an arbitrary by-product of the compound formed by time, matter and coincidence, on the other hand, is a nonsense unacceptable by those who have faith in the existence of God as the sole Creator of all living beings. Believers should assume the responsibility to save societies from such perverted and unreal beliefs and warn them.

The claim of "coincidence" put forward by the theory of evolution is denied by science.

Another significant fact that deserves a special consideration about this subject is that scientific discoveries also definitely refute the evolutionist claims that "life emerged as a result of pure coincidences and natural phenomena." This is because there are extraordinarily complex examples of design in life. Even the cell of a living being is a great wonder of design that totally annuls the concept of "coincidence".

This superior design and plan in life are certainly indications of God's unique and matchless creation, of His eternal knowledge and might.

The efforts of evolutionists to explain the origins of life with chance are rejected by science in the 20th century and today, in the 21st century, they met a total defeat. (See Harun Yahya, Blunders of Evolutionists, Vural Publishing) Indeed, the reason why they deny Creation although they see this fact is their blind adherence to irreligiousness.

God did not create living beings through an evolutionary process.

Since the existence of creation, in other words, a conscious design, is obvious, the only question that remains is "through what kind of a process the living beings were created." The misconception of some faithful people emerges right at this point: The wrong reasoning that "Living being could have been created by evolving from one another" is actually related to how the process of creation occurred.

Indeed, had God willed, He could have created living beings through an evolutionary process from nothingness, as the abovementioned individuals propose. And had science proved that living beings evolved from each other, we could say, "God created life through evolution." For instance, if there were any evidence available that reptiles evolved to form birds, then we would say, "God transformed reptiles into birds with His command 'Be'!". Ultimately, both these living beings individually possess bodies overflowing with examples of perfect design, which cannot be explained away by chance. Transformation of these designs into one another -had such a thing really happened- would surely be another evidence for creation.

However, the situation is not so. Scientific evidence (especially the fossil record and comparative anatomy) point to the contrary; there is not a single evidence on earth that an evolutionary process took place on it. The fossil record clearly indicate that different living species did not appear on earth through evolving from one another by fine gradations, but that on the contrary, distinct living species appeared on earth suddenly fully formed and without any preceding ancestors similar to them. Neither birds sprung from reptiles, nor fish transformed into land-dwelling animals. Each living phylum is created individually with its traits particular to its kind. Even the most renowned evolutionists had to accept this fact and confess that this provides an evidence for Creation. For instance, evolutionist palaeontologist Mark Czarnecki confesses as follows:

"A major problem in proving the theory (evolution theory) has been the fossil record; the imprints of vanished species preserved in the Earth's geological formations. This record has never revealed traces of Darwin's hypothetical intermediate variants - instead species appear and disappear abruptly, and this anomaly has fueled the creationist argument that each species was created by God. (Mark Czarnecki, "The Revival of the Creationist Crusade", MacLean's, 19 January 1981, p. 56)

Especially during the last fifty years, developments in various scientific fields such as palaeontology, microbiology, genetics and comparative anatomy, and new discoveries show that the theory of evolution is untrue and living beings appeared on earth all of a sudden in their distinct and perfect forms. Therefore, there is no reason to suggest that God employed the process of evolution in Creation. God created every species individually and at one moment, with His command of "Be!" This is a certain and explicit fact.

It is of vital importance for people of faith to be alert and cautious against the ideological systems committed to struggle against God and religion. For 150 years, Darwinism provided a so-called scientific ground for all anti-religionist ideologies that caused misery to mankind, such as fascism, communism, and imperialism and legitimized the merciless practices of those who adopted these philosophies. Hence, it would not be right to ignore the inner truth and the real purpose of such a theory. For every Muslim of conscience, it is a major responsibility to disprove every anti-religious ideology rejecting the existence of God with a thought struggle and to demolish falsehood with truth. 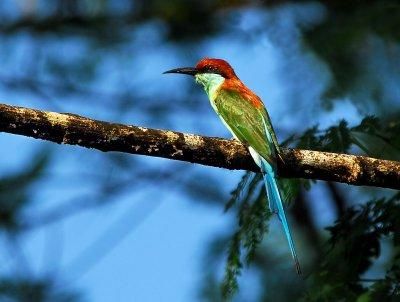