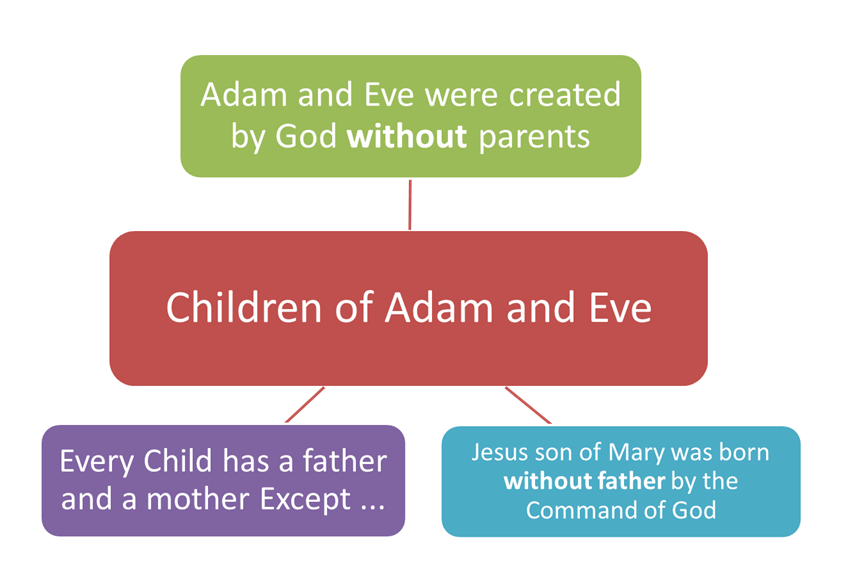 And mention, in the Book the story of Mary, when she withdrew from her family to a place toward the east. And she took, in seclusion from them, a screen. Then We sent to her Our Angel, and he represented himself to her as a well-proportioned man.

She said,
"Indeed, I seek refuge in the Most Merciful from you, so leave me, if you should be fearing of God."

The Angel said,
"I am only the messenger of your Lord to give you [news of] a pure boy."

She said,
"How can I have a boy while no man has touched me and I have not been unchaste?"

He said,
"Thus it will be; your Lord says, 'It is easy for Me, and We will make him a sign to the people and a mercy from Us. And it is a matter already decreed.' "

So, she conceived him, and she withdrew with him to a remote place. And the pains of childbirth drove her to the trunk of a palm tree. She said,
"Oh, I wish I had died before this and was in oblivion, forgotten."

But the angel called her from below her,

"Do not grieve; your Lord has provided beneath you a stream. And shake toward you the trunk of the palm tree; it will drop upon you ripe, fresh dates. So, eat and drink and be contented. And if you see from among humanity anyone, say, 'Indeed, I have vowed to the Most Merciful abstention, so I will not speak today to any man.' "

Then she brought him to her people, carrying him. They said, "O Mary, you have certainly done a thing unprecedented. O sister [from the family] of Aaron, your father was not a man of evil, nor was your mother unchaste." So, she pointed to him, baby Jesus. They said, "How can we speak to one who is in the cradle a child?"

"Indeed, I am the servant of God. He has given me the Scripture and made me a prophet. And He has made me blessed wherever I am and has enjoined upon me prayer and Charity as long as I remain alive and made me dutiful to my mother, and He has not made me a wretched tyrant. And peace is on me the day I was born and the day I will die and the day I am raised alive."

That is Jesus, the son of Mary - the word of truth about which they are in dispute. It is not befitting for God to take a son; exalted is He! When God decrees an affair, He only says to it, "Be," and it is.  Jesus said, "And indeed, God is my Lord and your Lord, so worship Him. That is a straight path."  Then the factions differed concerning Jesus from among them, so woe to those who disbelieved - from the scene of a tremendous Day.  How clearly, they will hear and see the Day they come to Us, but the wrongdoers today are in clear error.  And warn them, of the Day of Regret, when the matter will be concluded; and yet, they are in a state of heedlessness, and they do not believe.

A Translation from the original Arabic Quran, Chapter 19