His hair looked dishevelled and his whole appearance was unkempt. He was thin and wiry with so little flesh on his bones  that it was painful to look at him. Yet in single handed combat he defeated and killed many opponents and in the thick of  battle he was an outstanding fighter against the mushrikeen. He was so courageous and daring that Umar once wrote to his  governors throughout the Islamic state that they should not appoint him to lead any army out of fear that he would have  them all killed by his daring exploits. This man was al-Baraa ibn Malik al-Ansari, the brother of Anas ibn Malik, the personal  aide of the Prophet.

If the tales of Baraa's heroism were to be told in detail pages and pages could be written. But let one example suffice .

This particular story begins only hours after the death of the noble Prophet when many Arabian tribes took to leaving the  religion of God in large numbers, just as they had entered it in large numbers. Within a short space of time only the people of  Makkah, Madinah and Taif and scattered communities here and there, whose commitment to Islam was unwavering,  remained within the religion.

Abu Bakr as-Siddiq, the successor to the Prophet, stood firm against this blind and destructive movement. From the  Muhajireen and Ansar, he mobilized eleven armies each under a separate commander and dispatched them to various parts  of the Arabian peninsula. Their purpose was to make the apostates return to the path of guidance and truth and to confront  the leaders of the rebellion.

The strongest group of apostates and the greatest in number were the Banu Hanifah among whom Musaylamah the  Imposter arose, claiming that he was a prophet. Musaylamah managed to mobilize forty thousand of the best fighters among  his people. Most of these however followed him for the sake of Allah or tribal loyalty and not because they believed in him.  One of them in fact said, "I testify that Musaylamah is an impostor and that Muhammad is true but the impostor of Rabiah  (Musaylamah) is dearer to us than the true man of Mudar (Muhammad ). "

Musaylamah routed the first army sent against him under the leadership of Ikrimah ibn Abi Jahl. Abu Bakr dispatched another  army against Musaylamah led by Khalid ibn al-Walid. This army included the cream of the Sahabah from both the Ansar and  the Muhajireen. In the front ranks of this army was Baraa ibn Malik and a group of the most valiant Muslims.

The two armies met in the territory of the Banu Hanifah at Yamamah in Najd. Before long, the scale of battle tilted in favor of  Musaylamah and his men. The Muslim armies began to retreat from their positions. Musaylamah's forces even stormed the  tent of Khalid ibn Walid and drove him from his position. They would have killed his wife if one of them had not granted her  protection.

At that point, the Muslims realized in what a perilous situation they were. They were also conscious of the fact that if they  were annihilated by Musaylamah, Islam would not be able to stand as a religion and Allah--the One God with whom there is  no partner--would not be worshipped in the Arabian peninsula after that.

Khalid mustered his forces once more and began reorganizing them. He separate(i the Muhajireen and the Ansar and kept  men from different tribes apart. Each was put under the leadership of one of its own members so that the losses of each  group in the battle might be known.

The battle raged. There was much destruction and death. The Muslims had not experienced anything like this in all the wars  they had fought before. Musaylamah's men remained firm amidst the tumult, as firm as immovable mountains although many  of them had fallen.

The Muslims displayed tremendous feats of heroism. Thabit ibn Qays, the standard bearer of the Ansar, dug a pit and  planted himself in it and fought until he was killed. The pit he dug turned out to be his grave. Zayd ibn al-Khattab, brother of  Umar ibn al-Khattab, may God be pleased with them both, called out to the Muslims: "Men, bite with your jaw teeth, strike  the enemy and press on. By God, I shall not speak to you after this until either Musaylamah is defeated or I meet God." He  then charged against the enemy and continued fighting until he was killed. Salim, the mawla of Abu Hudhaifah, and standard  bearer of the Muhajireen displayed unexpected valor. His people feared that he would show weakness or be too terrified to  fight. To them he said, "If you manage to overtake me, what a miserable bearer of the Quran I shall be." He then valiantly  plunged into the enemy ranks and eventually fell as a martyr.

The bravery of all these, however, wanes in front of the heroism of al-Baraa ibn Malik, may God be pleased with him and with  them all.

As the battle grew fiercer and fiercer, Khalid turned to al-Baraa and said, "Charge, young man of the Ansar." Al-Baraa turned  to his men and said, "O Ansar, let not anyone of you think of returning to Madinah. There is no Madinah for you after this  day. There is only Allah, then Paradise."

He and the Ansar then launched their attack against the mushrikeen, breaking their ranks and dealing telling blows against  them until eventually they began to withdraw. They sought refuge in a garden which later became known in history as The  Garden of Death because of the many killed there on that day. The garden was surrounded by high walls. Musaylamah and  thousands of his men entered and closed the gates behind them and fortified themselves.

From their new positions they began to rain down arrows on the Muslims.

The valiant Baraa went forward and addressed his company, "Put me on a shield. Raise the shield on spears and hurl me  into the garden near the gate. Either I shall die a martyr or I shall open the gate for you."

The thin and wiry al-Baraa was soon sitting on a shield. A number of spears raised the shield and he was thrown into the  Garden of Death amongst the multitude of Musaylamah's men. He descended on them like a thunderbolt and continued to  fight them in front of the gate. Many fell to his sword and he himself sustained numerous wounds before he could open the  gate.

The Muslims charged into the Garden of Death through the gates and over the walls. Fighting was bitter and at close  quarters and hundreds were killed. Finally the Muslims came upon Musaylamah and he was killed.

Al Baraa was taken in a litter to Madinah. Khalid ibn al-Walid spent a month looking after him and tending his wounds.  Eventually his condition improved. Through him the Muslims had gained victory over Musaylamah.

In spite of recovering from his wounds, al-Baraa continued to long for the martyrdom which had eluded him at the Garden of  Death. He went on fighting in battle after battle hoping to attain his aim. This came at the battle for Tustar in Persia.

At Tustar the Persians were besieged in one of their defiant fortresses. The siege was long and when its effects became  quite unbearable, they adopted a new tactic. From the walls of the fortress, they began to throw down iron chains at the  ends of which were fastened iron hooks which were red hot. Muslims were caught by these hooks and were pulled up either  dead or in the agony of death.

One of these hooks got hold of Anas ibn Malik, the brother of al-Baraa. As soon as al-Baraa saw this, he leapt up the wall of  the fortress and grabbed the chain which bore his brother and began undoing the hook from his body. His hand began to  burn but he did not let go before his brother was released.

Baraa himself died during this battle. He had prayed to God to grant him martyrdom. 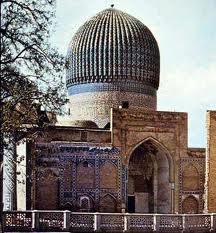